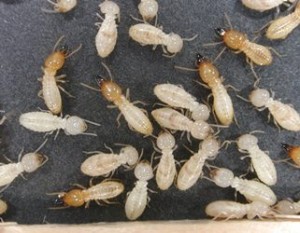 Coptotermes acinaciformis is a subterranean termite and are very destructive. They are found underground to avoid the light and also travel underground up to 100m from the colony in search of food. They are around 4mm -6mm in size.

These termites build their nest within the base of a tree or underground. A colony may have over a million termites. They also build subsidiary nests away from the main colony. In buildings, subsidiary nests may be built in wall cavities, provided there is access to moisture (e.g. from leaking water pipe). Every termite colony consists of 4 castes, each having a specific role within the colony’s social structure: Reproductive, workers, soldiers and the swarmers. 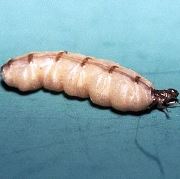 Repoductives of a colony are the King and Queen Termites, they are central to any vibrant termite colony. The Queen acting as an egg-laying machine producing between 2,000 and 3,000 eggs per day and can live for 25 years. The King and Queen are formed from swarmers when a new nest is formed. 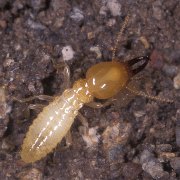 Soldiers are the most distinctive caste and the easiest caste from which to identify a species. The role of this caste is to defend the colony. They are males and females whose sexual organs and characteristics have not developed. Like workers, they are susceptible to desiccation and seldom leave the colony or shelter tubes. The fontanelle is used to discharge a secretion associated with defence, since it is a repellent to ants and other enemies of termites.

Swarmers are darker coloured, winged, reproductive’s that fly from the nest in their thousands, eager to establish a new colony. Because swarmers are poor flyers they generally only fly some 50 – 100 metres from the parent nest. As such when observing flying swarmers you can generally assume a termite nest is near-by. 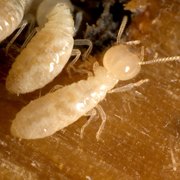 Workers are the most abundant caste in the colony, performing all the tasks in the colony except defence and reproduction. It is this caste that does the damage to timber. Workers are males and females whose sexual organs and characteristics have not developed. They are wingless, blind and are susceptible to desiccation. They will only leave the security of underground tunnels and shelter tubes when humidity is high or in the search for new food sources.

Coptotermes acinaciformis is highly destructive to buildings and timber structures. This is the most widespread termite pest in Australia, and is responsible for over 70% of serious termite damage to buildings. If you suspect that you have these termites, arrange a termite inspection with Clifton Pest Management. 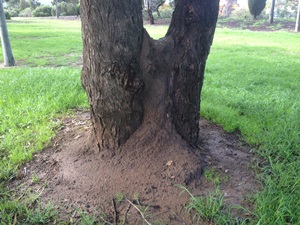 Termite nests that commonly look like growths on trees are referred to as Aborial nests. It is common for non-dangerous species of Termites to make these, however there is always the risk that they are the type that feed on timber housing materials.

Generally, the first sign of infestation noticed by homeowners is the presence of swarming reproductives on window sills or near indoor light.
Swarmers inside the house nearly always indicate an active infestation in the structure. The presence of swarmers outdoors is a natural phenomenon, but should warn that termites are near and possibly attacking a nearby building.

Another indication is the presence of wings, discarded by swarmers as a normal part of their behavior, found near emergence sites, on window sills or in cobwebs. Infestations also can be detected by the presence of shelter tubes going up the sides of piers, utility entrances or foundation walls. 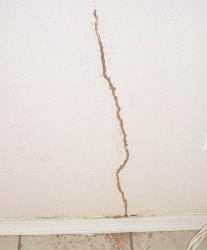 Tunnels made of mud positioned on the outside of house structures (brickwork, walls, concrete posts, concrete slabs and other dense structural materials) are a strong sign of your building being at risk of termite infestation. Termites travel through these mud tunnels when it is not easy for them to burrow through an object in search of food and water.

Wood damage is a definite indicator of termite infestation. Wood that yields a dull, thudding sound when struck by a screwdriver or hammer should be examined.

Browse through our gallery of Termite damage photos below.

Learn more about termites in these videos:

Don’t leave it too late. Book and inspection today with Clifton Pest Management by enquiring below.